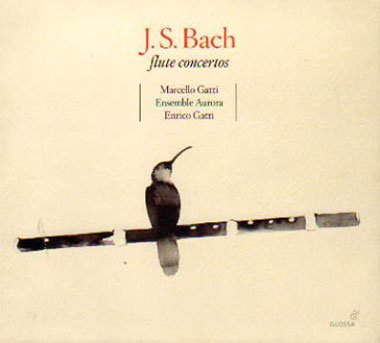 After his two recent incursions into the musical world of the young Vivaldi, that excellent violinist from Italy Enrico Gatti, together with his Ensemble Aurora, has a further pleasant surprise for us: on this occasion it is a hitherto unpublished work by Johann Sebastian Bach. Using as a basis a series of arguments of an unquestionable solidity - set out in a fascinating booklet article accompanying our disc - the musicologist Francesco Zimei has reconstructed the until now lost Flute Concerto in B minor. The inclusion of this work in the Neue Bach Ausgabe is currently being arranged. Zimei's meticulous and detailed study has as its starting point Bach's habit of reusing instrumental works for new vocal compositions. In this way, Zimei identifies as sources for the "new" concerto the aria Zieht euren Fuß nur nicht zurücke (BWV 207/3), the introductory sinfonia from the cantata Non sa che sia dolore (BWV 209) and an aria included in the celebratory cantata Durchlauchtster Leopold (BVW 173a). Once the magnificent results have been heard few doubts can remain that we have here a new treasure by the Kantor of the Thomasschule. The brothers Gatti - Marcello is the flautist on this disc - complete their Bach recital with the earlier version of the Fifth Brandenburg Concerto (the "Triple Concerto" in D major, BWV 1050a) and with the famous Ouverture in B minor (BWV 1067), works closely related both in contents and their galant-style intentions with the new discovery which has motivated this recording. This new discovery will undoubtedly provide much scope for discussion and will serve as encouragement for the inclusion of a new work in the repertory for many ensembles.

Sonatas for traverso and fortepiano